If you are observant you will have noticed the number of potholes is diminishing as the County Council’s [NCC] team of contractors has gone round renewing road surfaces.

Please help NCC by going online and reporting any new or persistent problems with holes in the road. Parish Councillors will report any they see, and any which do not receive attention will be followed up at PC meetings.

There is a link to the pothole problem reporter on this website.

If you haven’t signed up yet, you will receive no further reminders of our existence after May 25th.

The Area Committee met on 19th April and decided in favour of the development at the East End of the Village. In due course, we will publish the exact wording of the decision, and will explore the consequences for our community’s future growth.
~
It is our intention to do what we can to ensure that the development is efficiently and effectively delivered, to the advantage of our village, its life and its people.
~
In the meantime, the Parish Council has written to Gordon Castle, the Chair of the Committee, expressing its concerns about key issues, and about the meeting itself.
~
The permission includes, we believe, as a condition, the granting of a 25 year lease to Lowick Football Club, and the removal of the restriction which forbids building a permanent structure as a club facility.
~
Part of Our Letter
~
It was clear to the PC that the decision would go this way, as the Planning Officer could see no objection to the scheme, as the laws and procedures of planning currently stand.
~
We sent our objections to the Planning Department, and these were included amongst the 75 documents on the website.  We indicated a willingness to attend a Planning Committee meeting, but the meeting was held during the working day and no one was able to attend. We have asked that the Council’s continued objections to the scheme be minuted, in spite of remarks made in the meeting which suggested it had changed its position. 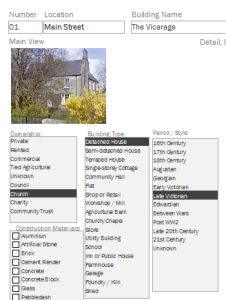 The Lowick Neighbourhood Plan is still underway, despite a recent lull. Preparations are underway for a public consultation on planning policies, the boundary of the settlement inside which building may take place, and the style of different parts of the village , and how this might affect building. Other issues are under consideration – such as The Natural Environment, Community Facilities and Development, and A Register for Buildings and Features that are of special quality or interest. 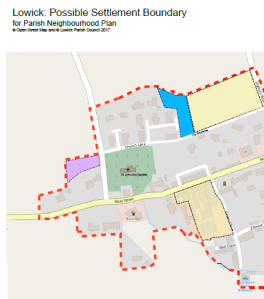 During May, we will be holding an exhibition to get your opinion about the features that we have been discussing, above. The proposals for the size and future development of the village will be on view, and these will reflect any planning decisions that the County Council makes about recent proposals.

We will also be including first drafts of the policies which will underpin these plans, and these will be circulated online beforehand. If you wish to recive advance copies, please email us via the contacts page of this website.