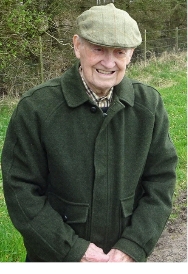 Born in 1937 at Laverock Law, near Lowick. George was the youngest in his family.  In 1990 he married Eleanor Patterson, nee Baptist, (Nellie) who had been widowed at an early age and for many years had cared for her elderly mother.  George and Nellie lived happily together for 31 years at 10 Main Street, Lowick  until Nellies’s death earlier this year.

George was a countryman with an understanding and appreciation of the natural world and a particular interest and knowledge about birds. He was a keen shot and won many cups for clay pigeon and target shooting. He liked nothing better than going fishing in the local ponds and bringing home some fresh trout to share with his neighbours.

A painter and decorator by profession, working on his own, George was in demand in the larger houses in the district, never needing to advertise the quality of his work for, as he said, his name was always mentioned at dinner parties, when someone was looking for a reliable efficient decorator.

George never travelled far from home except for his two and a half years in the RAF on National Service, where he decorated the officer’s mess and was then allowed to use their canteen – a story that illustrates George’s ability to get what he wanted from each situation. Asked to give his home address as he went through the RAF registration process, Lowick was misheard by the Flight Sergeant as “Lerwick”(Shetland) – George didn’t object when his period of leave was extended to allow for long travel times, because of living so far away..

He lived a full life right up to his admission to hospital, an independent person who loved being in his garden where he grew quality vegetables: fine roses and sweet peas. He had been caring for Nellie before she died last January, doing their own washing cooking and domestic chores. George was certainly a character, regularly disappearing in his car to Berwick or Belford shops, having a special affection foR Marks and Spencer their prawn cocktail, rice pudding and fruit cake.

A bit isolated towards the end because of his poor hearing (a legacy from his shooting), George maintained a determination and sense of humour up to the end. When told by the paramedics who came to check him after a fall, they would take him to hospital he said ‘If you try that I will let your tyres down !’

George will be remembered with affection, his disappearance a loss to the village of Lowick, the end of a particular era in the life of the community.

His funeral will be on Monday 8th November at 11am. in St John The Baptist church Lowick, followed by burial in Kyloe.