DEVELOPMENT AND THE VILLAGE BOUNDARY 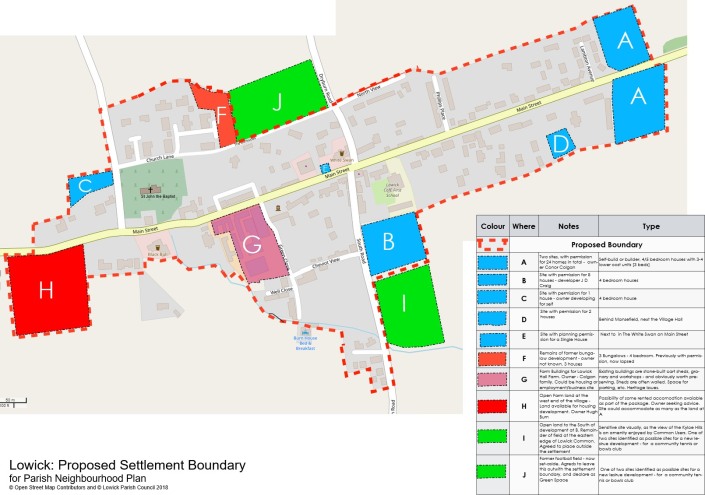 The recent day intended day collecting responses to the Lowick neighbourhood plan has now past, and many have contributed their thoughts to the proposals.

The Parish Council is still keen to get further feedback on the proposals it has made – especially comments on the policies and key principles that have been suggested.

There are is still a few  months before a referendum can be held, and plans for housing development and a village boundary are still being discussed. While the majority of responses about both are in favour of the proposals, it is still possible to add your views to the discussion.

Development is a controversial issue in rural villages, and it is important to ensure that the best decision is made. The plan which will fix the amount of development for 13 years or more has to be the right one, for the community as a whole.

The first proposal of the plan is to introduce a Settlement Boundary that would prevent most housing development not inside it for the duration of the plan. You can see, the suggested boundary above. Your comments on where this should be are welcome.

The Parish Council asks you to look at the questionnaire, which has been revised to ensure that the issues are clearly spelt out.

Currently, the amount of development agreed by the planners comfortably exceeds the minimum number of houses that should be built over the life of the plan. This number is 22. Currently, there are 37 sites in the village which have permission assigned.

These proposals suggest one further site, which would comprise rented as well as open market housing.  It only is the guaranteed inclusion of these homes that make the proposal attractive. The site for this proposal is on the proposed Settlement Boundary map.

In answer to suggestions that there is no requirement for these homes, the The Planning Group will be looking at the housing needs of the area, and the viability of the included suggestions…

The Parish Council is not in favour of open commercial development on the declared SHLAA listing sites, which would allow unrestricted development north and south the village of a further 139 homes, within the timescale of the plan. It does not believe that this would provide housing for young families which would help to encourage a younger population and workforce.

With a boundary clearly defined, the only development which could be permitted would be on rural exception sites, specifically targeted at the affordable homes/social housing market.

Please respond to the questionnaire, so that the right decision may be put forward in the referendum.

To review the proposals and submit your views, the ONLINE QUESTIONNAIRE is included below.

This is a text widget, which allows you to add text or HTML to your sidebar. You can use them to display text, links, images, HTML, or a combination of these. Edit them in the Widget section of the Customizer.
Loading Comments...
%d bloggers like this: