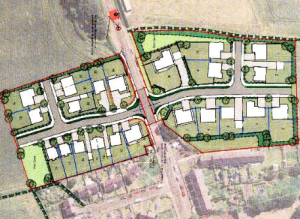 After a well attended meeting of the Parish Council to discuss proposals for 24 houses at the east end of the village, it was decided to defer responding to the Planning Department until the new year.

For details of the proposal, see the previous Lowick Live story: follow link.

At the meeting, Conor Colgan outlined the plans, after those attending had had a chance to look the through the documentation. About a dozen members of the public spoke, a majority voicing concerns about aspects of the development.

The majority who spoke were residents whose homes neighboured the fields concerned. These were balanced by support for the plans as a means to improve the prosperity of the village, both on the side of the proposal itself, and in general terms.

Many felt there were other sites which could have been chosen first, before this one. The key issues that emerged concerned the provision of genuine low-cost housing which would help and attract younger people to come or stay in the village. It was felt that a genuine need for rental property was felt in the village, and as it stood there was no way this proposal could provide this.

Mr Colgan, responding to the comments, which will be published on the Parish Council website in due course, promised to see what could be done about the concerns expressed, after consultation with his family, and the agents for the scheme. He said that the project had to be financially viable for the business and his family partners. He would look into the ways the developers could be legally obliged to sell only to first home buyers.

There will therefore be further discussions between the PC and Mr Colgan, prior to the next Council Meeting in January. Ann Gold, the Clerk to the PC is contacting the Planning Department to ask for the response deadline to be put back.

In the meantime, those who have comments to make have been asked to submit these to the County Council by the 29th December deadline.