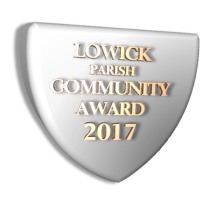 The Community Awards for 2017 were awarded by the Parish Council to Moira and Michael Metcalf, and brothers John and Alan Fairbairn.

The winners are chosen from nominations made by local people, and each year, the aim is to choose 2 people to receive recognition for their service to others. One category is reserved for a young person, if anyone is nominated.

This year, it was decided to choose Moira and Michael, as they are such a team working together. The Young Person nomination went to the two brothers who have done so much for local children’s sport.

The Metcalfs were nominated for their calm and patient dedication to running the Village Hall over the years. The Fairbairn brothers have given the same unswerving service to Lowick’s football club and facilities.